Here we are, mid-way through the fourth day. Last night was h.a.r.d. Chloe yelped out around 2 am, and vocalized for a good 5 seconds. She was very upset, confused, and restless. We tried medicine, food, going out to potty, massage, laying with her, but nothing was calming her down. She was quite panicked for the rest of the night – whining and panting, then pacing, until morning.

We brought her back into the vet this morning – they looked her over from head to toe. Her fluid build up looks great – better than they expected. She doesn’t have any signs of constipation. Her gas is out of control, which I assume is from the canned dog food and ground beef. I am going to boil some chicken for her this afternoon, I hope that might be an acceptable food for her that might alleviate the toxic gas. The vet prescribed another med for her – gabapentin.

We were able to get her to eat a bit when we got home, and then gave her a dose of gabapentin and she finally relaxed! First time in 8+ hours. It was a relief to us to see her finally calm. I know we’ll have ups and downs, but it’s really so hard to feel powerless in those situations. Hopefully adding the new med will help us better manage her pain. Picture below is of that first restful moment. I thought it was kind of funny how she leaned part of her body off the dog bed, as if she was trying to raise the sore area. 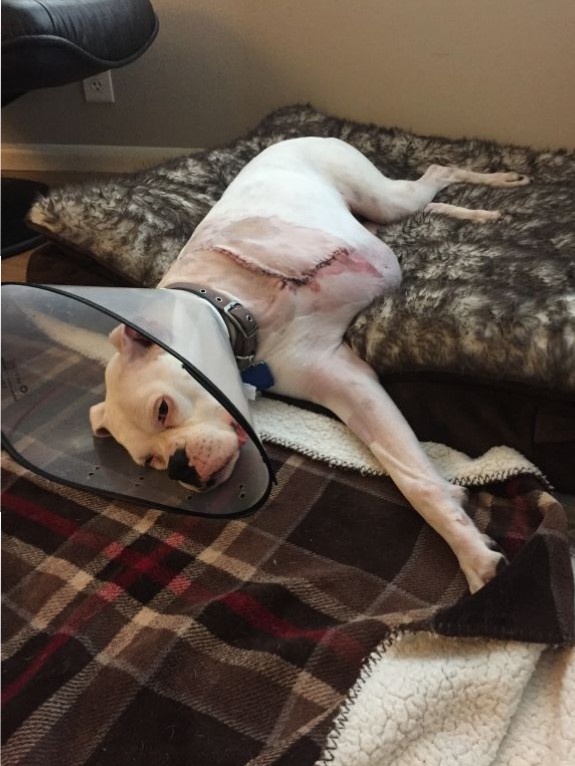 Outside going potty and getting some fresh sniffs. It’s raining here today, so the snow is rapidly melting and uncovering all sorts of soggy nature in the yard which I know is right up her alley. Pre-amputation, today is the kind of day that she’d want to spend outside as much as possible. We’d be cursing her when she stubbornly refused to come in, and using up all the towels cleaning her paws and undercarriage. Soon enough, she’ll be back at it I’m sure. She looks her youngest when she’s outside – hardly 6 years old in my opinion. For not liking the extremes of the weather, she really loves being outside and our 40 degree day is a welcome change from winter. 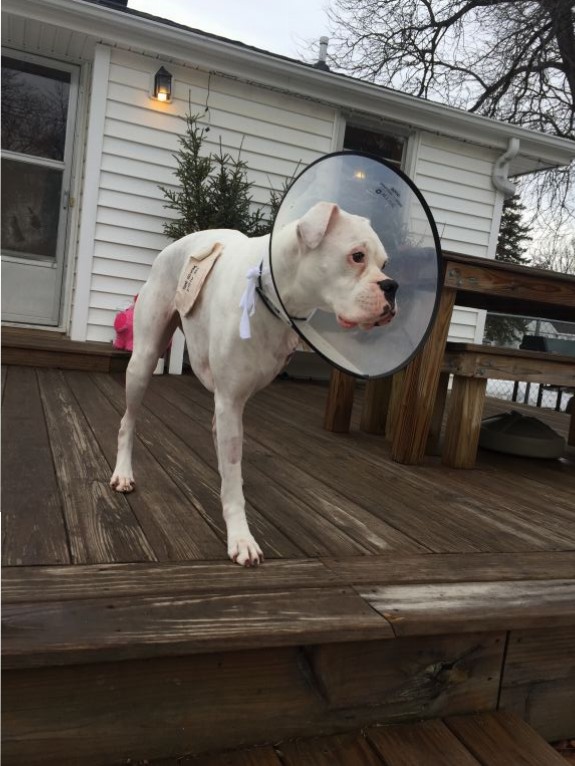 A dear friend sent Chloe a basket of get well treats. Thankfully, Chloe and Jenson both alerted me to the big white truck outside that dropped the package at the door. I may have missed the delivery, had they not barked for a minute straight. 😉 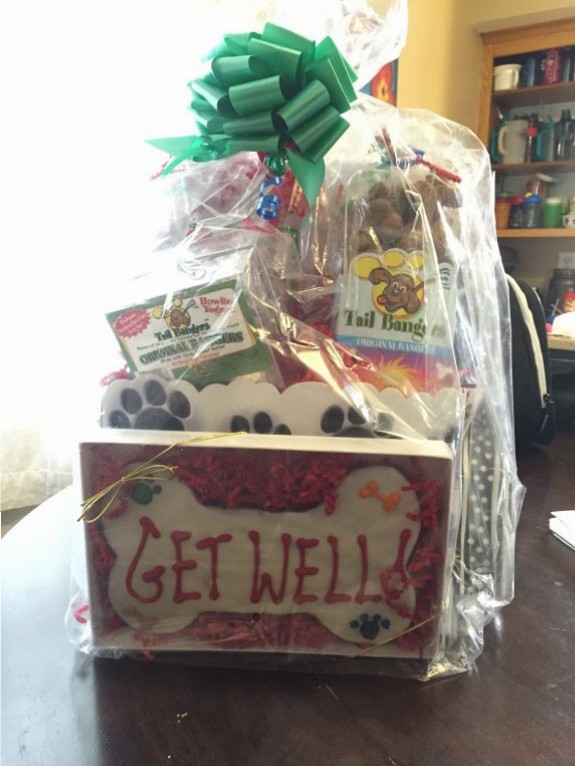 My wish is for a restful day and especially overnight. Tomorrow, we are scheduled to go in at 10:30 to have her pain patch removed. If her pain still seems on the higher end of things, the vet said we could discuss putting a fresh patch on. We will see.

Here is a very short clip of Chloe sniffing & walking on the deck. Amazing to me, how well she is doing. She’s still whiny, and I’m not always sure what I should be doing, but I think we are doing ok.

She is happier without her cone, but sadly her fur-brother tries to box and wrestle her without it, so it has to stay on.

Her appetite is still poor, but she’s had a few small meals of canned dog food, and ground beef with plain yogurt.

She won’t let me ice her incision area, and I’m worried about the squishy area turning into a problem because I can tell there is some fluid there. But, it’s not dripping.

Chloe is home! But, wow, this is hard. Really hard. As soon as she settles in and we start to feel comfortable that we are doing all we can for her, she gets up and is restless again. I have a feeling this is normal for the first few days (weeks?) but it is so hard.

We had a 2:15 appointment to go over aftercare with the vet, and to take Chloe home. I cried like a lunatic when we arrived, and again as soon as she walked in thru the door with the vet. Her incision! It’s so big! And what did she do? She jumped up on us as soon as she saw us, nub wagging! Which made me laugh and cry even harder.

As they’ve been saying, she did wonderfully., Really, better than expected 24 hours out from a major surgery. She came home with a Fentanyl pain patch, and three bottles of pills. Rimadyl, Tramadol, and Simplicef.

The car ride home was stressful. She’s a pain in the butt to take in the car anyway – she has to look out all the windows and refuses to settle down – and on four legs she was always slipping around. With three? I was so worried. I sat in the back with her and tried to get her to calm down, and yes, we made it home safely and uninjured.

She walked up the two steps into our house with no issues. She went straight to her water dish and d-r-a-n-k. She was so thirsty. And of course, we bought her an elevated bowl but she looked at it like it was poison, and drank from her regular dish on the floor. I guess I’m glad we bought a cheaper one, instead of the nice, modern looking $80 elevated dish. It was her normal meal time, but she wouldn’t touch her kibble so we gave her some ground beef, and the last few bites we had left from a rotisserie chicken.

We were able to keep Jenson relatively calm – he was very curious, but it is almost like he knew something was wrong because he didn’t jump on her like he normally would after they’ve been separated.

We then got her settled in the living room on her dog bed, then the floor, then the dog bed again… she’s been a bit restless. Needing to move every 40 minutes or so.

My husband had to leave – to go pick up some soft dog food for her, and to get our kids from daycare. Chloe about lost it. She’s not usually an anxious dog (unless she’s separated from Jenson), but she became distraught when Joe left. She started whining and panting, and I worried that she needed pain meds earlier than the doctor said she was due to get them. So much so, that I called the Tripawds Hotline (I’ve already forgotten your name, but THANK YOU for helping me calm down!) and talked thru how Chloe was acting and how I was feeling. I ended up giving her one Tramadol, and eventually she settled down.

When Joe and the kids got home – it was a little rocky at first. Jack, our three year old, said he was upset that Chloe only has three legs now, and said he didn’t want a three legged dog. However, he was very sweet with her, very gentle, and at one point when Chloe whined I heard him whisper “Chloe, it’s ok. It’s ok, my bear-bear.” so I know he’ll do just fine with her. Ava, our 18 month old, did fine. She was gentle when we asked her to be, and she didn’t bodyslam Chloe so we’ll consider that a win.

Chloe has been really restless about every 3 hours, so we’ll just see how things go. This is really hard. I knew it would be, but it’s just really hard. It’s so hard to know what the cause for the whining is, and I really want to just make her comfortable. She’s finally resting right now (using my husband’s legs as a pillow) and I’m just grateful to hear her soft snores.

We have an appointment with the vet on Saturday to remove the pain patch, and do an incision check.

Pictures below, some are of her stitches which are a little jarring. Proceed with caution. 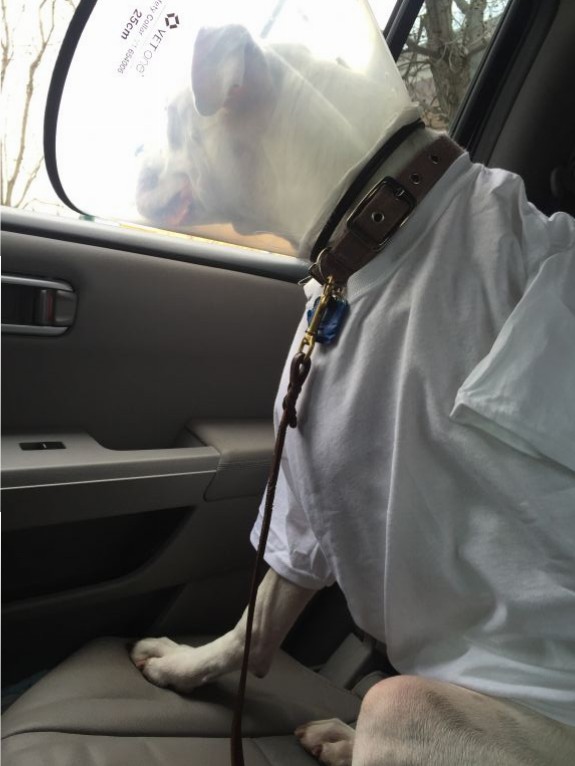 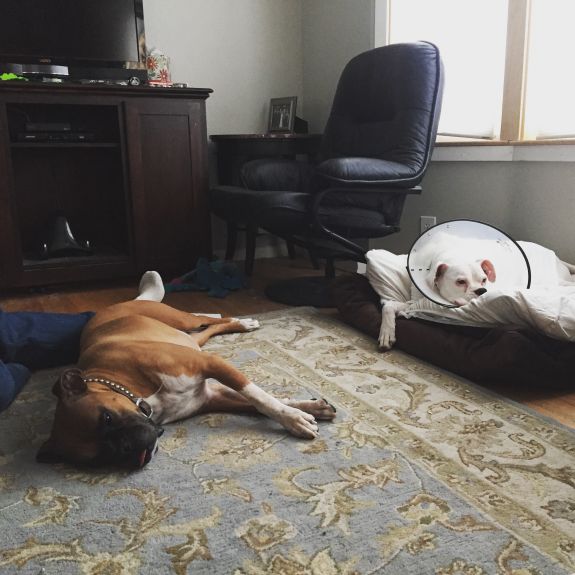 This is tough to see. We were told to watch the saggy part at the bottom of her scar, for fluid build up. 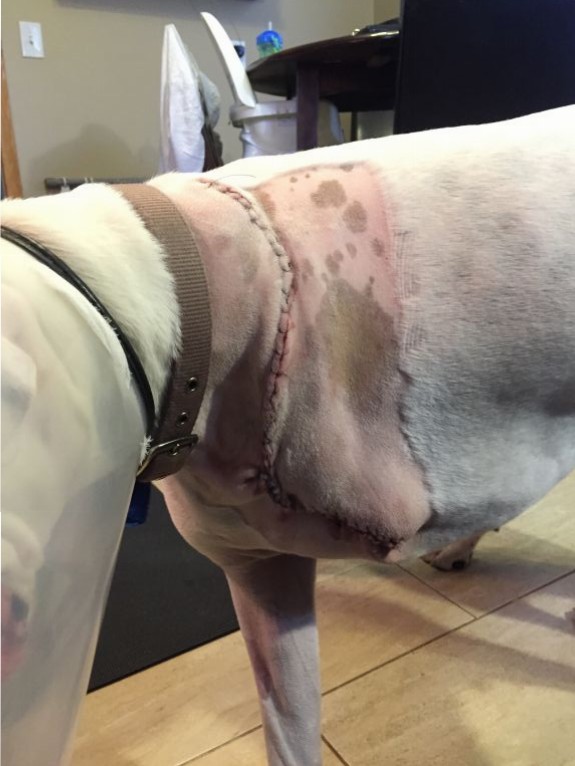 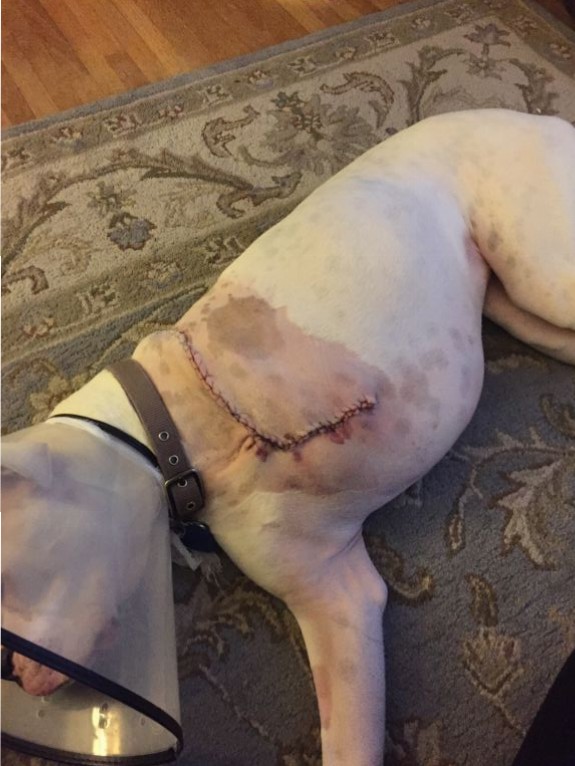 I guess we’ll just see what tomorrow brings. I’m home with her tomorrow, and Friday. The weekend will be a whole new ballgame, with the kids home full time, so I’m nervous about that. One step at a time, I guess.

My husband talked to the vet again this evening. He said Chloe is doing great! She was sitting up, observing her surroundings. She even walked outside, assisted, to potty. The vet was impressed, said that she was one of the best he’s ever seen so soon after an amputation.

Such reassuring news to hear. Puts me at ease a bit.

We have an appointment at 2:15 tomorrow to pick her up, and go over aftercare with the vet. On the phone, the surgeon told Joe that we want to ice it for the first few days, to help limit swelling & fluid build up. Does that sound right, experts? (I know, I need to review the required reading again! This is a lot of new info to process..)

Jenson had a rough day. He was very upset by the time we got home from work. My husband had to basically hand feed him some chicken in order to get him to eat. Jenson just wanted to search for his girl. He’s resting now, with one of our kid’s blankets.

Joe talked to the surgeon around noon. Surgery was “textbook”! She said that Chloe was still not awake from anesthesia and sounded a bit concerned about that, but we received an update about an hour ago that Chloe was awake and sitting up! (!!!!)

No pictures, or any other info at this point. Just glad the scariest part is over.